In this session, we had the chance to inspect several hives due to low numbers of trainees. It was a mixed  experience, with ups and downs. Colony health, temper and population from one colony to the next varied so much, regardless of all being in the same apiary.

There were also several colonies with either no queen or even laying worker bees. Unfortunately, worker bees cannot lay fertilised eggs, meaning they are only able to lay drones – not more workers. When a colony comes to this stage, it has truly reached the end of the line and is desperate but with diminishing numbers of worker bees, it will unfortunately, not survive. I find these encounters  are little reminders that bees are wild animals and as such are subject to nature’s rules and the never ending game of survival of the fittest.

It was not all sad. A colony that had an opened queen cell, was suspected to have a recently mated queen bee. All eyes were on the lookout for tiny eggs and larvae, a sign of a healthy, mated queen. One after another, we lifted the frames, inspected them and placed them back, disappointed in the absence of both the queen and the brood. We went through all 10 frames in this patient manner, but no luck. The apiary manager, David, was adamant to give a few of the central frames a second look – I mean they were heaving with bees it was highly likely we missed something. He shook the bees off the frame, until there were almost none on it and asked everyone to have a go at checking the cells. After everyone had checked the frame and decided there was nothing there, it was finally my turn. I picked the frame up, squirmed, and voila! I saw the larvae: healthy, fat larvae, all cosy in their cells! This colony was doing alright afterall.

That warm fuzzy feeling: As a beekeeper, I look after the wellbeing of the bees and feel like their guardian. My emotions are directly linked to their health and prosperity and is equally heartbreaking to see a colony struggle, just as it is exhilarating to watch it thrive and grow. I hope this relationship I have with these wonderful creatures remains always as innocent and that I am able to spread it for others to experience. 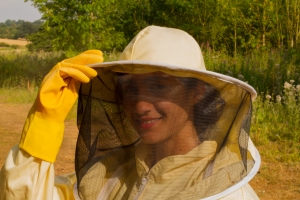